Last week I wanted to introduce my Jewish heritage to my Czech students by talking about Rosh Hashana, the Jewish New Year which lasted from last Wednesday, Sept 20 -Friday, Sept 22 (Happy 5778 :P!). This included an apples & honey taste test – although some thought it was too sweet (naturally), most really enjoyed it.

Since most Czech students, or Czech people generally, in my experience know mainly stereotypes about Jews (although many of the students pleasantly surprised me with their knowledge!), I wanted to give the situation a bit of context.

When I came to class, I wrote the words “stereotypes” and “diversity” on the board. I asked for the kids’ input, but since neither of these has an easy one-to-one translation into Czech, I defined them. First, I tried to demonstrate what a stereotype is by writing on the board one very well-known internationally, “All Americans are stupid”… and I asked if anyone had heard that before.

In a class of my youngsters, here’s how that went:

😀 Cross-cultural understanding is much easier than everyone thinks… 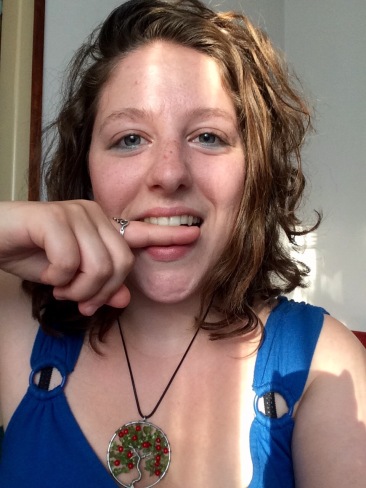 The American smile at work.

After we myth-busted that one, we also talked about some Czech stereotypes, including the common one that Czechs are xenophobic. (Here’s a little information about their European neighbors, including the alliance of the four Visegrad countries.) This will become relevant below.

Afterwards, I asked them if they think Czech Republic is a diverse country.

There are nearly 500,000 foreigners living with short-term or permanent visas in CZ, out of a total 10.6 million population. This translates to roughly 5% of the population, and according to some sources, 3% of that is Slovak (high immigration due to the fact that the two countries split in 1993, despite baby boomers still insisting on the name Czechoslovakia). In the country, Prague has the highest concentration of foreigners at about 14%. (Unfortunately, many of them do not speak Czech.) Maybe they like it here because of the high quality and value of family life. But overall, 95% of the population is “ethnically and linguistically Czech.” (Though this doesn’t exclude German ancestry, based on the close, pre-WWII history.) So-called “old” minorities like Poles and Germans live in regions of CZ which are close to their countries of origin.

Czech Republic is not a diverse country – but! It could be! Or, it’s starting to be.

Back to my small case study. After talking about American stereotypes, we moved on to Czech ones. Conscientious classes mentioned the stereotype of Czechs being racist (the link will lead you to a recent and very controversial incident of social media meltdowns regarding the company Lidl).

Indeed, this is a very interesting time for that question considering the EU refugee crisis and the Visegrad group’s negative stance towards “migrants.” Whenever a student brought up the racist stereotype, either the others laughed about it or you could feel some slight tension. They didn’t like this stereotype and vehemently disagreed with it – to their credit. (The question is, of course, whether they understand what racism really is. Admittedly a difficult feat in a country that was under a Communist regime for forty years.)

And when I asked the students whether CZ is a diverse country, most of them said without hesitation that it is. I did not ask them to elaborate too much, but simply asked, “What makes it diverse?”

Here is what they said.

There are reasonably-sized minority groups, at least in the Czech consciousness. These include mostly Slovaks, and afterwards Romani (a group with its own dark history in CZ), Ukrainians and Vietnamese.

Together they are called “new minorities.” The Vietnamese, as far as I know, are the largest Asian minority, but they were strangely and incorrectly identified by many classes as Chinese or Japanese – despite the fact that some students have Vietnamese classmates. They also mentioned Africans, whom they have started to see in the region, and are a bit of a novelty for them (95% of the country is white and Czech).

A big positive of this lesson was that some classes learned the word “dialect”! There are three main parts of CZ, Bohemia, Moravia, and Silesia, and each of the 12 regions within those three have dialectal differences.

For example, Brno-speak is called Hantec. They call the tram (tramvaj) a šalina instead – this is the major example everyone shares.

From the West to the East of the country, dialects are said to get shorter. Bohemians, especially “Prague people,” are said to SIIIING their words, which are long and flowy. Moravians (perhaps they are the origins of this saying) speak in a medium-paced way, but often alter vowels within the words like with mléko and polévka, and with the endings of adjectives – dobrý vs. dobrej. And Silesians, like people who live in Ostrava, famously cut their words short. The best example is the famed and well-loved singer Jaromír Nohavica.

Many students are involved in hody celebrations, like those that happened last week in Tišnov. They dress-up in their roles as stárci in processions and exhibitions of traditional dances on the square and in the cultural centers, by morning walking from house to house offering slivovice and wine and inviting people to the festivities. This is one of the main ways the cultural history is preserved.

I got schooled on this topic recently by people who have participated and they told me all about the differences in kroj – regional costume – of course, more decorative costumes and more skirts means richer villages and towns.

Czech friends: Is it true? I know this is showing a typical Bohemian kroj, but do most kroje have this many layers? http://www.tresbohemes.com/2016/10/whats-under-kroj/

Posted by CHLOHEMIAN on Sunday, September 24, 2017

Overall, it was a very interesting and eye-opening experience for me to actually talk to the students about their opinions. It was encouraging, and it shows a big open window for the future of CZ as a country that is interested in learning about the foreigners that inhabit it.

12 thoughts on “A Surprising Answer to the Question: Is Czech Republic a Diverse Country?”