In Czech Republic, food is very social. All schools from elementary to university serve government-subsidized, fresh-made lunch (a holdover from the Communist era). Students and teachers eat alongside each other; even colleagues from larger companies in bigger cities might be allowed to get their lunch in school cafeterias. And most importantly, many families keep the tradition of Sunday lunch every week without fail.

If you are lucky enough to be invited into someone’s home for Sunday lunch, remember that it straddles like the line between formal and informal. Here are some things to keep in mind.

Czechs follow the rules of etiquette you were forced to listen to once at a course and then promptly forgot (because Americans rarely use them). Here’s how it looks in the super-formal sense: 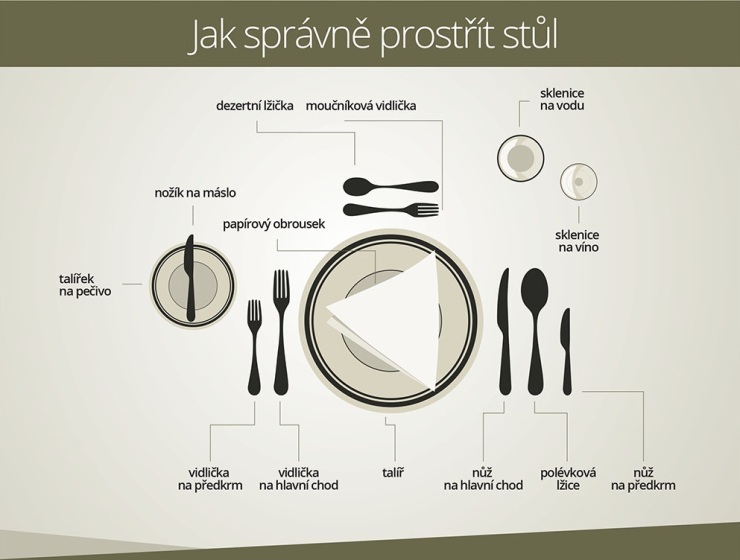 Sunday lunch is much more basic than this (plate, fork, knife, spoon, etc), but if you are asked to set the table, notice that your fork is on the left, and knife and soup spoon are on the right (and there will always be soup). The spoon is on the outside of the knife because it will be used first, and the soup bowl may be on top of your plate before you start the meal. Your salad bowl (see below) will be on the side of your plate.

Funnily enough, I always have to switch my fork and knife because I use them in the opposite hands, but it’s easy enough to do this under the radar 🙂

The most honored guest will be served first

If you don’t eat often at this house – or never have before – this will probably be you. If someone elderly is joining, it may be them. This is one of the biggest ways I’ve noticed respect towards older people in Czech Republic (besides grandchildren being obligated to help their grandparents in the garden, moving, picking, planting, etc. during the weekend).

Czechs, I know it sounds crazy, but the only legitimate translation we have of this is Bon appetit, from French. Many people translate this as “Enjoy your meal,” which is fine, but you will never hear anyone but your waiter say it.

This is what you say before you start eating. It’s like “Bless you!” in English. Mandatory, if you want to seem polite.

Those words look innocent enough, but the pronunciation of chut’ is a killer. For English speakers, t’ is pronounced as if you are saying “tyah,” except very very short at the end.

For some reason, Czechs don’t typically have a drink during their meal. In our school cafeteria, most people eat their lunch, and then specifically get a drink of water, tea, or milk afterwards. I am not able to eat this way, but it works for them. One of the reasons why is because the meal is often specifically designed with a “side dish” that will moisten dry food. For example, cucumber, tomato, or carrot and apple salad:

Carrot and apple seems like a strange combination, but it’s awesome. However, the first time I saw it, it was like my worst nightmare. I thought to myself, Oh no. They are going to make me eat coleslaw. (A cabbage-based condiment made with tons of mayonnaise, which I hate, which is usually put on hot dogs.)

The vegetable used at Sunday lunch will often be something fresh from the garden; whatever they have in large amounts at the time.

If there’s a drink, it’s more likely to be wine, or even more likely, beer.

One conversation at a time

Perhaps this is specific to my experience, but it’s unusual at an intimate family lunch to have more than one conversation happening at a time. People are often quiet, actually enjoying their food, and listening respectfully to whomever is speaking. (As opposed to Americans who are always shouting, even though we rarely eat together at all nowadays.)

While you’re eating, if you want to take a breather (HALF TIME!), place your cutlery like this: 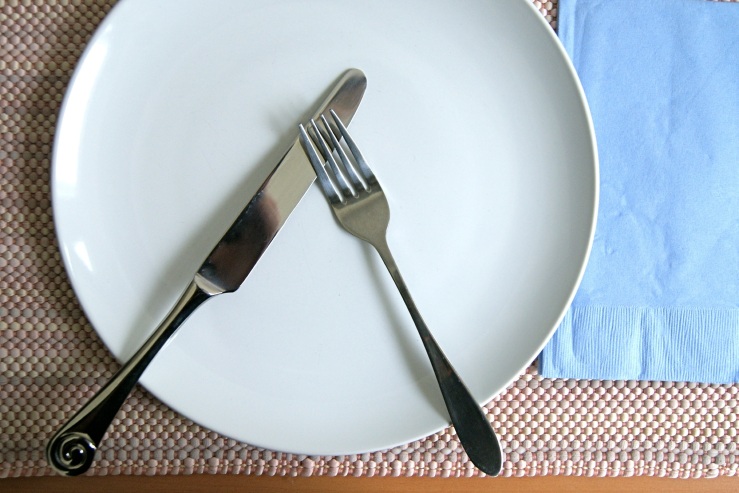 If you want to show that you’re done, place your cutlery like this:

Fork and knife to the right of the plate, roughly at the 4/5 o’clock position (pm). This is an unspoken signal that you are totally finished (and perhaps about to blow up from deliciousness overload). I have often accidentally put my silverware this way at a restaurant and had my plate taken away before I was done with it, so be careful!