I would love to be in the mind of a truly multilingual person, who can switch from Portuguese to German to Spanish to English lightning-quick. Knowing English fluently and being a continuous learner of Czech and Hebrew, I wonder if any language learner can help but get confused between the ones they know, since languages are fluid things and our minds work in a continuous way. It’s not always easy, in a single moment of trying to get a sentence out fast, to control every word and make sure they all come from the same language.

A little while ago, I posted about how to say it better in Czech – words that seem to fit the meaning better than in English, because of their sound or because of the word’s root. Like Czech, Hebrew is a language I know well enough to identify with, or feel, many of the words.

When I’m not speaking it, I use Duolingo to keep my knowledge fresh…

Another winner: “Do ducks eat sandwiches?” Thanks Duolingo.

Quick History of Hebrew. Hebrew is the language of the Torah (the Old Testament) and was spoken by ancient Israelites. Under the British Mandate of Palestine, Jews who were sick of bad treatment in Europe started to move there as part of the Zionist movement to reclaim their homeland (a claim that grew urgent with the threat of Hitler). These Jews spoke Yiddish in addition to their country’s national language to unite them as a religious group in day-to-day life, while Hebrew by that point was only used for praying. Eliezer Ben-Yehuda wanted to revitalize the use of Hebrew as a national language, and led a widespread effort to reintroduce it (also coining hundreds of words like for “doll, ice-cream, jelly, omelette”) through newspapers. He believed that to “make it a living language” again, everyone should speak it at home (and later, at school), and it was the only language he allowed his son to hear. Thus, his son became the first new native speaker of Hebrew. He was eventually successful in bringing it back societally, and it became Israel’s official language. And fun fact? Biblical and Modern Hebrew speakers would be able to understand each other.

That’s interesting, because the Czech language also had to be revitalized, though not to the same extent, during and after its inclusion in the Austro-Hungarian Empire. Czech was inundated with German influence and many people spoke other languages (later, also Russian). The Czechs wanted to keep their language culture intact.

Why Did I Want to Learn Hebrew? I studied Spanish in high school, and though I’m still convinced I’ll learn it fluently someday, Hebrew was the first language I felt at home in. I learned the Hebrew alphabet as a child in an after-school program for Jews, but this wasn’t relevant until I went to Israel for the first time in 2010. After seeing all the street signs in Hebrew and wanting to know what they meant, I decided to start classes when I got back to university.

Because it has a different alphabet, people think Hebrew must be really difficult. If you get stuck on the alphabet, it is; however, basic Hebrew grammar isn’t that different from English. What I did struggle with were the three-letter roots of many words, which I couldn’t connect to anything I knew. As an example, the three letters כתב signify something related to “writing” or “written.” At first, I had trouble remembering any words at all in Hebrew (and later had this problem in Czech, since neither of these languages is similar at all to English by sight). When I later got the hang of the three-word roots, they made it much easier.

Similar philosophy, different sounds. Czech and Hebrew are both phonetic, unlike English – what you see is what you say. One similar sound is “ts” – that’s ‘c’ in Czech and ‘צ’ in Hebrew. ‘R’ sounds are very different in all three languages. One sound Czech doesn’t have that Hebrew does is “ccchhh” (ח or כ – look how innocent they look). I remember when I would pronounce batoh (backpack) in Czech like “batoccchhhh” because of Hebrew, when it actually has a very very quiet ch sound.

Still, I occasionally get confused between Czech and Hebrew. How could that be possible, you ask? They are so different! Well, because there are some similar words/phrases and because of the way that sounds run together or verbs are formed. 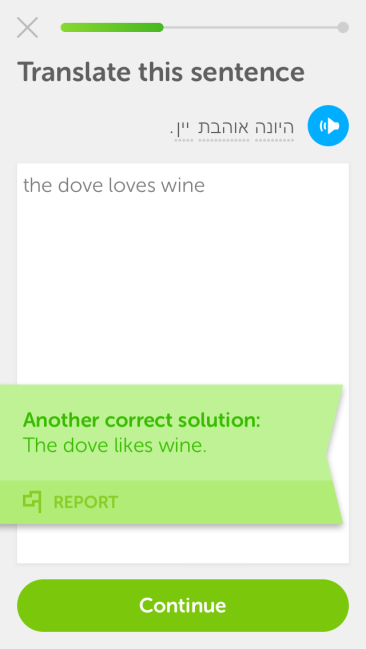 Duolingo is obsessed with doves’ diets.

I learned the word lev, which means “heart” in Hebrew, before I learned lev meaning “lion” in Czech, so I will always think that the word just sounds like a Hebrew word. This makes it very difficult to distinguish between the two. Especially because I connect it with the Hebrew phrase simu lev, which means “you (all) pay attention! (or “dávejte pozor!” in Czech) – something like “put your heart in it” – which I was used to hearing yelled at me and my classmates all the time in Ulpan – Intensive Hebrew class.

In Hebrew, Ma zeh? is a question. It means “What is this?” – a basic phrase that everyone needs to know. In Czech, Mazej! is an exclamation, often yelled at dogs or people who annoy you. It means something like “Go away!”

I guess for this one it’s better that I learned Hebrew first… imagine if I knew mazej in Czech and then went to Israel, and thought everyone everywhere was telling me to go away….

Sidenote: A Hebrew word which is pronounced exactly like Die! means “Enough!” or “Dost!” in Czech. This is also a very common word. Imagine my surprise when I first saw my Israeli friend telling her dog over and over to die.

Example 3: -li at the end of words

When I’m listening to people speak Czech and hear “-li” added to the end of a verb, which means you are making the past tense plural, I get it all confused with Hebrew. Czech examples: lyžovali, pracovali – (they/we/you all) skied, worked. In Hebrew, li is a preposition/pronoun which means “to me.” For example, Tni li… means “Give me…” My brain would confuse and merge these two possibilities, so that I would hear and understand  lyžovali as “They skied to me.”

What could be more different than stating your existence (Hebrew) and negating the existence of things (Czech)?

“Nikdo tam nebyl, ani Kuba.” No one was there, not even Kuba.

“Nemám ani úkol, ani učebnici.” I have neither my homework nor my textbook.

And what about saying it better in Hebrew? Though it may sound surprising based on the widespread impression of Hebrew’s harsh sounds, some words just roll off the tongue. They sound so elegant I want them to replace the words in English!

It sounds so elegant, like melody or flute. It sounds like it should be a musical instrument or a girl’s name. But nope, it’s a cucumber. It becomes less romantic when you add ccccchamutz on the end – melefifon chamutz is a pickle/gherkin (sour cucumber). 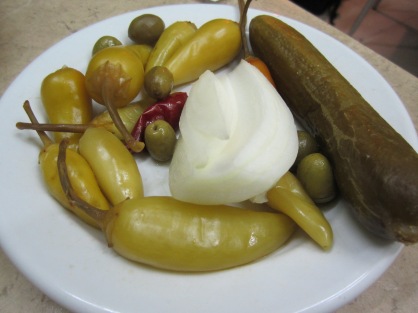 Pickles – a critical food for Czechs and Israelis.

The word aryeh sounds to me like a lion waking and stretching in the savannah. Aaaaaryeh. I can feel its lion’s mane. It’s satisfying. And also, I think, one of the nicest Hebrew names for boys.

The ‘tz’ sound makes this word sound a little harsh, but the ‘por’ with the classic back-of-the-throat ‘r’ at the end softens it. I think it captures the two sides of birds – their elegance and also the endless and eardrum-scratching twittering and chittering noises they sometimes make. Add -ah to the end and you have another animal that has become a (girl’s) name.

Hebrew is a master language of onomatopoeia – a situation when words sound like the thing they mean. Two of my favorite examples are:

Think of the way flip-flops sound shuffling across a floor. It sounds exactly like kof kof, sticking for a moment or scratching on wood.

Bak buk bak buk is the sound water makes as you are drinking and swallowing it. 🙂

In these last two examples, I would like them to replace the English words because they are just so funny and weird.

Ooga booga! That’s what you say to a child when you want to jump out and scare them. It’s what monsters say. It’s why the bad guy in “Nightmare Before Christmas” is called Oogie Boogie. I have no idea why cake is called ooGA in Hebrew (emphasis on the second syllable, unlike in English), but it is hilarious. I usually chuckle when I order oogat gvina (cheesecake) or oogat shokolad (chocolate cake). BOO! Cake is so scary.

And if that weren’t enough, you can have all your little chuckles with cookies. Oogya boogya!

How many languages do you speak? Do you get confused between them, and what are the funniest examples?

5 thoughts on “Is It Possible to Confuse Czech and Hebrew?”

A web series for the childfree community.

Explore the city of Berlin with us as we share stories, information, and highlight the women of Berlin.