We stopped for a 21-hour layover in Lisbon on our way to NYC, and boy was it gorgeous.

I love the fact that central Lisbon is connected to the airport by metro. Plus, its fare of about €2.45 is absolutely incomparable to what you have to pay to get to Paris and London city centers from the airport (UGH!). Plus, get a quick culture and history lesson at the airport metro station full of caricatures of famous Portuguese, mostly authors, architects, and artists:

When we arrived to our hotel, the rather central Residencial Roxi, we only had time for a quick dinner and the local beer, which seemed to be the equivalent of CZ’s Pilsner Urquell, Sagres [sagrš], and was just as refreshing, but *normal*: 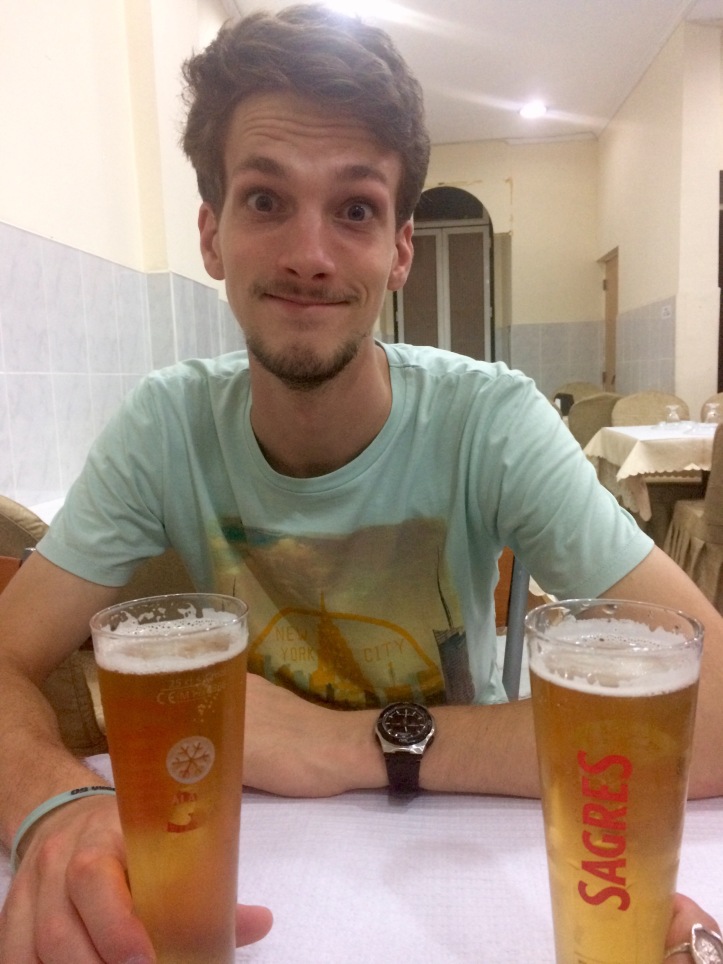 We could already see from a quick walk-around that the food culture is laaaargely based on seafood (marisco).

When we woke up in the morning, the first thing to do was try the famous pastel de nata. It’s a crusty egg custard – a nice sweet punch of a breakfast! 🙂

We tried two places (for the sake of comparison) – one a chain bakery, and one a local place. Prices were similar, both about €1 each. First up was the chain bakery, Portuguesa, which had lots of other sweets and fresh bread:

and second, Confeitaria Pastelaria. Both totally packed in the morning with locals, nearly next door to each other and to our hotel, which was convenient. 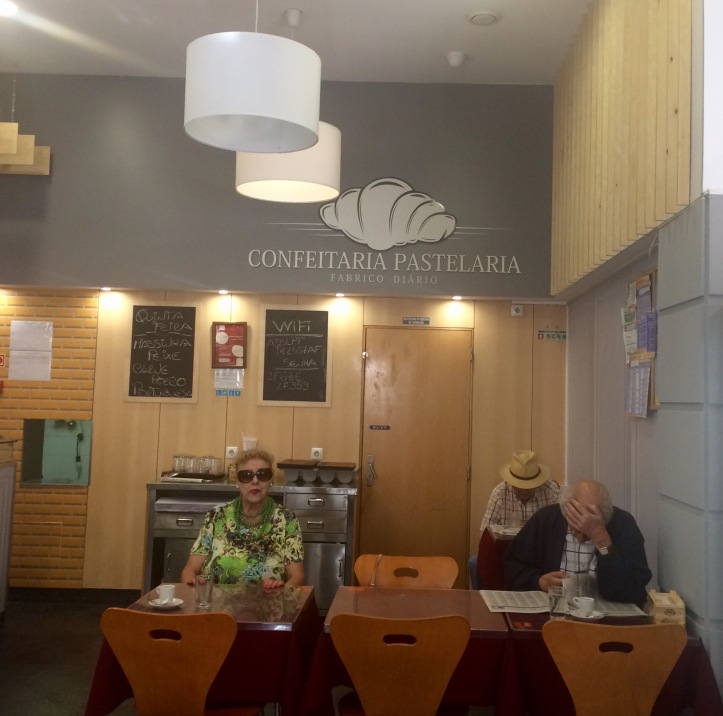 The verdict: they were largely the same. The first one was slightly sweeter, but both were delicious. I wish we could have stayed for a coffee in both places 😛 (I actually didn’t have any coffee the whole 21 hours we were there. Impressive.)

You could immediately feel the chill and laid-back atmosphere of the city. Locals were nice and helpful, but also not patient if you were standing in their way. In the evening when we arrived, a Wednesday, you could hear music and people’s voices drifting out of the bars on the street. My greatest regret that I didn’t have time for this time was missing an opportunity to go to a fado bar. Fado is a special type of poem-song music that focuses on the human experience, and which can be traced to 1820s Lisbon. I did listen to some of it on our Tap Portual airplane, but I’ll certainly be back for the real thing.

The main thing to do in Lisbon on short notice is take a walking tour (of your own design, or structured, like the Sandeman’s free New Europe Tour we took). It’s not very big and it’s very walkable; if you can’t manage it in the heat, take the super-cute old-style trams.

Portugal has its own style of architecture called Manueline, and you can see the influence on popular tourist sites the Tower of Belém and Jeronimos Monastery. The street our hotel was on was tiled like a mosaic (azulejo), and some of the buildings were tiled too! There was a national museum dedicated to this tile work that I would have jumped on if I had time! But since I didn’t, I learned that azulejo comes from the Arabic word for polished stone (it does remind me of the Grand Mosque of Paris) and migrated to Portugal from Spain in 1503, courtesy of King Manuel I. 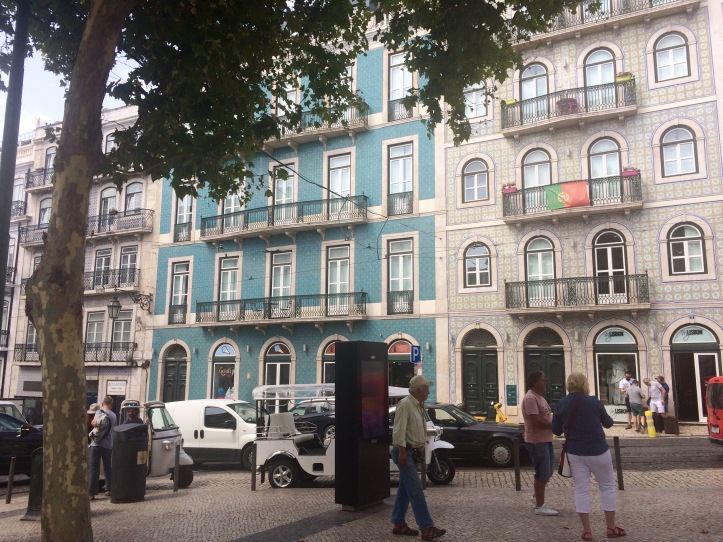 On your way to the center, you can visit the historical building of Casa das Chaves, a locksmith, which has some interesting murals on the outside:

This one is made with rusty keys!

The street art was another really beautiful and unique thing to appreciate about Lisbon, for example:

Here’s a view down to the main square, Praça do Comércio. Notice the tiled street! 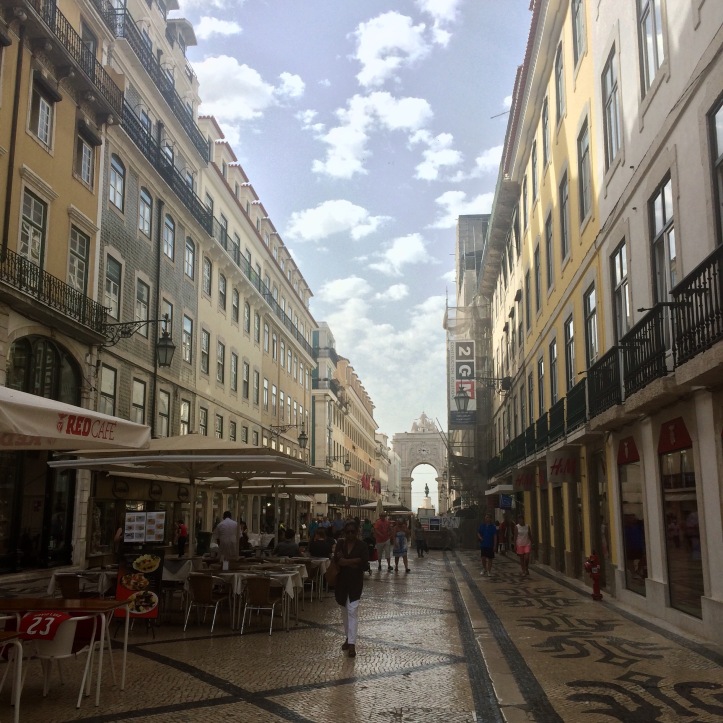 We walked about 20 minutes from our hotel to the meeting place for the New Europe walking tour. It’s free, but you should tip your (always fantastic) tour guide as well as you can afford. Meet the tour group at 10/11am or 2pm at Camões Monument in Largo de Camões, where your tour guide will start by telling you about this epic author who provided the foundation for literature in Portuguese in a transition from Latin and Arabic, and even sacrificed his wife when his ship sunk to save his manuscript and swim to shore.

Here’s a view of a corridor between houses in Lisbon as we walked towards a good view of the harbor. Lisbon is a great city for making at least 10,000 steps on your phone counter! 😀

And here’s the “Elevator” tram:

When we made it to a terrace overlooking the bay, we could notice a few things. One, a crane connected with a shipbuilder’s in the far left distance; second, the Christ the King statue in the right distance; and third, the 25 de Abril Bridge which connects Lisbon to the neighborhood of Almada, where Christ the King is located. The statue was erected as a thanks to god that Portugal remained neutral in World War I – a tribute to all the blood that was not shed. Meanwhile, you may notice that the Bridge is very similar to a little something you might call San Francisco’s Golden Gate Bridge? Well, the company that built that bridge won the contract to build a bridge in Lisbon as well, and just used the same design 😉 It worked once, why not again?

Another regret: not making it to the famously cute, colorful, and celebratory-looking neighborhood of Alfama. But I got a small taste of it with these red, white and green decorations hanging in an alleyway.

Our tour guide described Lisbon as a fan – you turn a corner and suddenly, what was a narrow alley or street turns into a great view. I love how a café is located in this tiny alleyway – a great view and great people-watching, what could be bad. 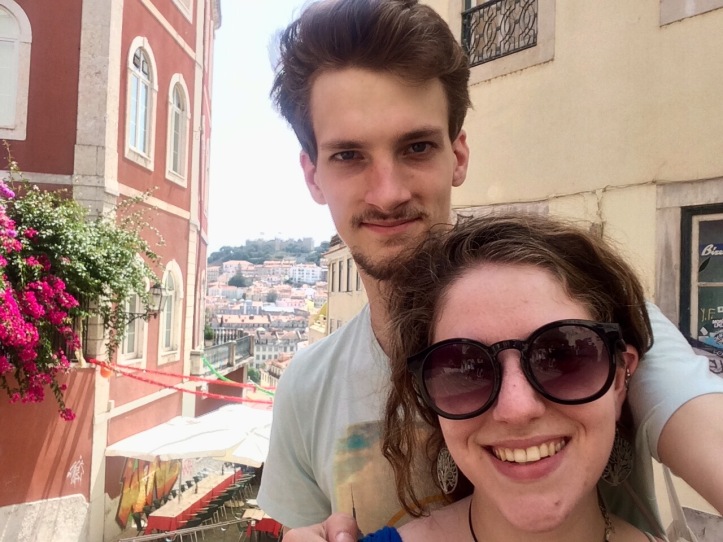 And it doesn’t hurt that the gorgeous bougainvillea provides a great selfie opportunity:

We stopped in the Largo do Carmo for a story about Lisbon’s peaceful Carnation Revolution, celebrated on April 25 and called Freedom Day. It happened in 1974 to overthrow the 40-year military dictator Caetano, and during the Revolution, carnations were put in the muzzles of rifles of the opposition army led by Salgueiro Maia, as well as the rifles of defecting soldiers who were supposed to defend the dictator. Apparently, not a drop of blood was shed.

But some water can be shed, into your water bottle – which you will need in summer – at this fountain which disperses free drinking water, just across from the military/police fort where Caetano shortly took refuge.

Our last stop was at the Lisbon Cathedral, which was massive and beautiful, and provided another great view of the city through one of its flying buttresses. 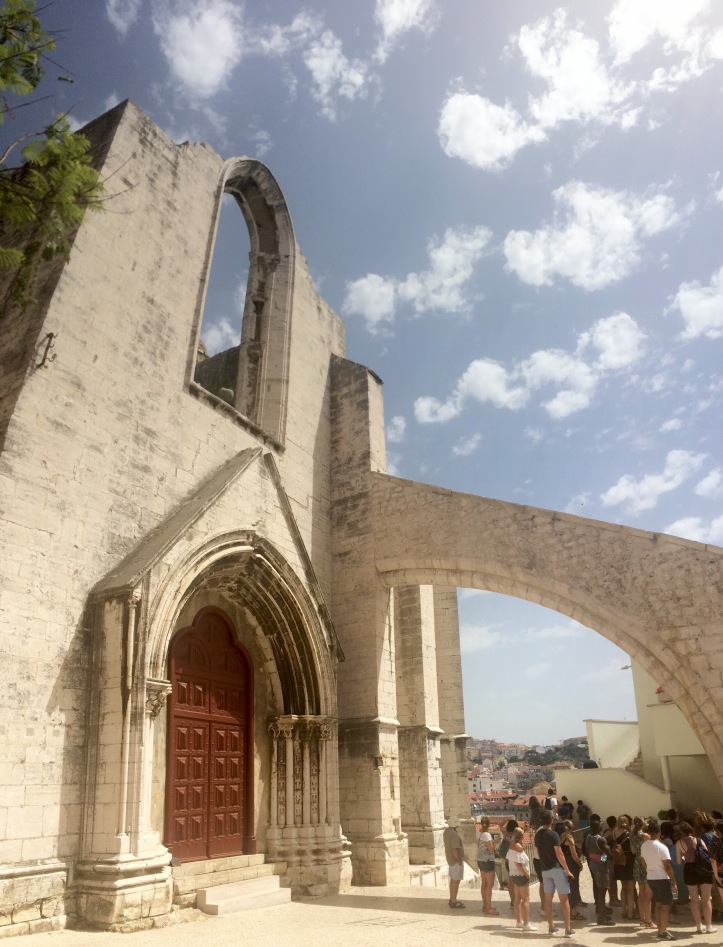 Looking closely at the Cathedral will expose some of the city’s history – specifically of the 1755 earthquake that shook and destroyed the city. You can see, for example, the break in the archway portal where the cathedral was affected by the quakes.

After this, we had a lunch of seafood pancakes and sea bream (with potato salad I liked way more than the mayonnaise-heavy Czech version… sorry!) at the Snack Bar Himalaia near our hotel. I can’t recommend this place enough – for €6-7 each we got a meal we could barely stuff into ourselves. The vibe of the place was wonderful, and it was full of locals, but the waiters didn’t bat an eye to give good service to foreigners. There are many choices on the menu including lots of fresh seafood, and we also tried the fantastic cold soup gazpacho was well as the traditional sour cherry liqueur Ginjinha (or Ginja), which reminded me of something similar I had in Lviv! Unfortunately we then had to get back to the airport (made easy with the metro), but waddling super full in the heat is never fun 🙂 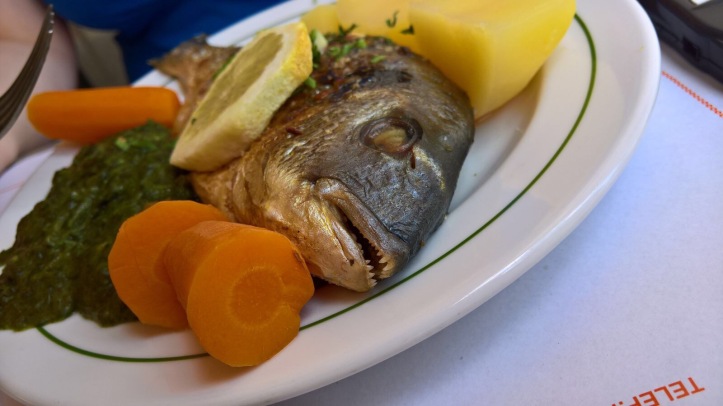 Overall, we had only five hours of “real time” in Lisbon. It was an absolutely beautiful city, and it was a shame we had to rush through it. Thankfully, a walking tour always gives a great summary on short notice, and Ondra and I discovered lots of things we’d want to return to on our next visit!

Have you been to Lisbon?