The Road Less Traveled in Prague (Part I)

This weekend, I finally got to go to Praha!

I have another orientation there in two weeks, so I wanted to do some of my own exploring beforehand. Prague is a 3.5 hour train ride away, so it’s quite a commitment.

However, when you get to Prague, you can feel pleasantly surprised that the subway (AHEM…metro. This is Europe) is clean and efficient, with a grand total of 3 speedy lines, helpfully color-coded!

I also got to have that exciting experience of taking a picture in any European metro and being so obviously a tourist.

I got to PLUS Prague Hostel in Praha 7 late Friday and decided to stay in and plan my weekend, with the help of some brochures and this amazing Culture-ist guide by Sarah Lambersky.

The hostel was the cheapest around, about $15/night for a room, and clean but I’d recommend it for bigger and louder groups, party types (there’s a bar, pool, sauna…)

When I woke up on Saturday (9/6), I was REALLY ready for breakfast, so I headed over to Muj Šálek Kávy in Karlin (Praha 3). This café may be the only thing to turn me hipster. They serve whole wheat “pancakes” – actually crepes, here – with fruit and creme fraiche, and also fresh juices; I got ginger, but I was feeling too self-conscious for a picture. 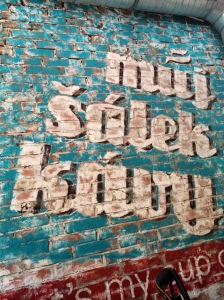 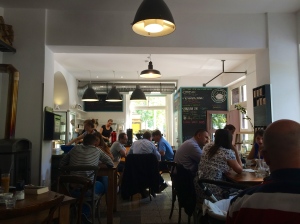 This experience was so amazing that I repeated it on Sunday morning with my fellow ETA Arica. (That’s her latté and carrot cake on the right.) I ordered an Ethiopian coffee – they do pourovers here – but they had just made a tasting tray of their Ethiopian, Costa Rican and Bolivian offerings, and gave me the extra for the same price as one coffee.

***COFFEE NERD MOMENT*** This was the absolute purest coffee I’ve ever tasted. I could actually isolate all the flavors described on the coffee profile cards. For shame, Brooklyn coffee snobs.

After that, I headed into Praha 1 (the city center) to check out the Museum of Communism (and get an awesome Thai Massage afterwards). Here are some highlights:

From there I met Arica and we did some sightseeing and eating. 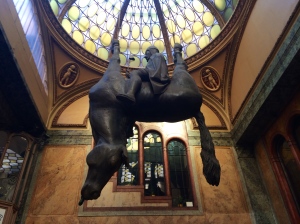 This is a famous (and controversial) sculpture by artist David Černý of St. Wenceslas, the seminal figure in the establishment of the Czech nation, upside down on a dead horse in Lucerna Hall.

Then we had a meal at one of Arica’s favorite restaurants, Lokál. I got a traditional dish, svičkova na smetany, or beef tenderloin in a vegetable cream sauce with bread dumplings- made slightly differently no matter where you get it: 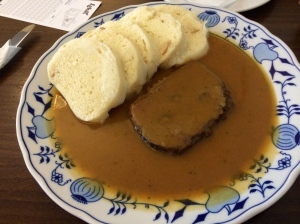 Yep, that’s a bill just for beer. Czech restaurants actually have very different and effective ways at keeping track of what’s been ordered and who owes what.

Later, we met up with a previous ETA at U Fleku, a brewery-restaurant; then went to the Globe café and bookstore, an expat hangout; and parted at the National Opera Hall, beautifully lit at night.

Then Arica and I ended the night at this super-cool industrial bar/dance club called Cross Club: 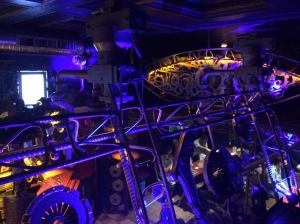 On Sunday, I was feeling a bit sick, so we kept it low-key, going to Kafka Bookstore in the Old Town Square and a Prague Starbucks. I still got to see a few of the major sites (though not Charles Bridge or any of Prague’s great parks yet): 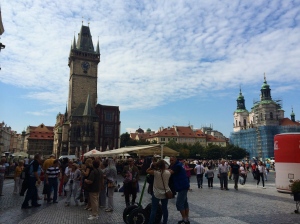 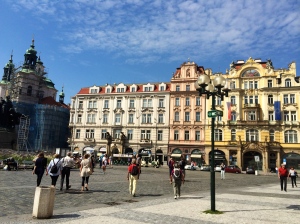 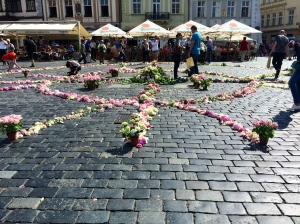 If you think that clock is cool, CZECH OUT my post about Olomouc.

I am obsessed with these beautiful buildings! Like I said, I’ll be back in Prague shortly for another orientation and will hopefully get to follow up on what I didn’t do this time around. Until then… 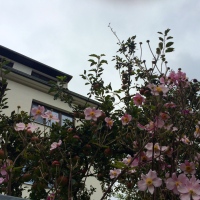 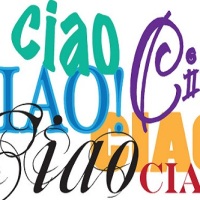 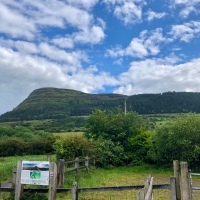 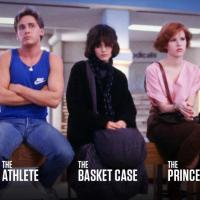 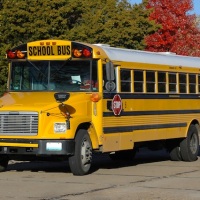